Are some law firms aiding and abetting crime? Recent legislative initiatives, parliamentary interventions, public warnings, investigations and data leaks have shown that some legal companies have become crucial enablers of serious organized crime, fraud and corruption. Is this the behaviour of individual black sheep, is it wide-spread – or even systemic?  What are the drivers of this trend – and what does Big Law have to do with it?

In our webinar on December, 6th, 2022, we took a closer look at this phenomenon. Our guest was David Enrich, New York Times business investigations editor. He presented his new book on the subject:

Servants of the Damned: Giant Law Firms, Donald Trump, and the Corruption of Justice

Register here for the video of the event 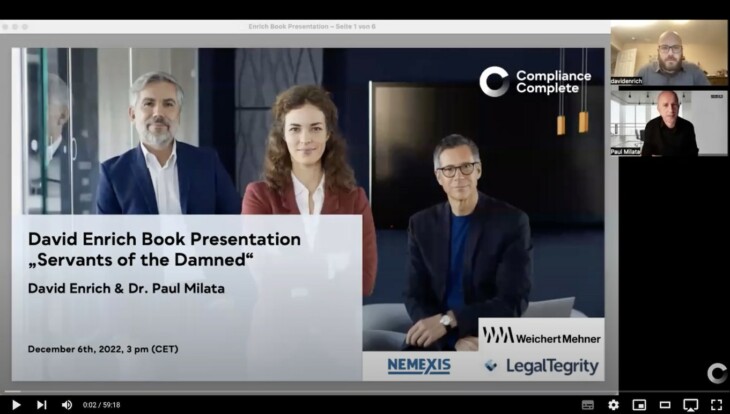 We addressed the following questions:

David Enrich, born in 1979, is book author and journalist for The New York Times. The latter put him on Deutsche Bank to find out how it handled “suspicious activity” in Donald Trump’s accounts. In 2020, his book on this topic was published: Dark Towers: Deutsche Bank, Donald Trump, and an Epic Trail of Destruction.

Moderator will be Dr. Paul Milata, CFE, founder and managing director of Nemexis GmbH, a member of the Compliance Complete network. Nemexis is an investigation company specialized in white-collar crime in Central and Eastern Europe. Since 2004, his clients have mainly included medium-sized companies as well as global players from the manufacturing and trade sectors.

Review of “Servants of the Damned” in the media:

“Enrich’s stories provide a disturbing window into how the rules underpinning democracy have been weaponised by those meant to protect it.” — New Statesman

“A deep dive into the law firm that became one of the key institutions in the president’s orbit. … Jones Day lawyers figured prominently in Trump’s rise to power and his exercise of it. Enrich treats the relationship as a sign of a broader decline in ethical standards at big American law firms.” — Financial Times

Register here for the video of the event